This projects contributes to global efforts by providing new climate information unraveled from ice cores in the Eastern Alps. Here we observe one of the most extensive deglaciation processes on the globe. Together with the large volume of glaciological, climatological and geochronological data, we can significantly improve our past mass balance chronology.

In recent projects, we drilled the first ice core in the Austrian Eastern Alps to the ground at Weißseespitze, 3500 m asl, found out that the lowest ice roughly corresponds to Ötzi the ice man’s period, and identified a significant interruption in the otherwise stratigraphic structure of the core by a first rough analysis of stable isotopes. In comparison with other radiometric datings, the onset of glaciation seems to be quasilinear with elevation, which could mean either that i) local accumulation is altered similarly by wind erosion across the Alps, or that ii) precipitation patterns changed in the past - which could be related to a general switch in North Hemispheric circulation.

We propose to drill ice cores from a site at the same elevation as Weißseespitze, but with different precipitation (Sonklarspitze, 3463 m asl), and fill elevation gaps in the Alpine records with cores at Großvenediger (3666 m asl) and Jamtalferner (3099 m asl). The cores will be complemented by two samples from basal ice layers/ground from two disappearing glaciers.

Ice cores will be analyzed to obtain quasi-continuous datasets of insoluble particle content and size distribution, stable water isotopes, major ions and trace elements. To be able to compare past and present conditions at the site, the present glaciological parameters are also recorded. Palynological dating, which potentially allows the analysis of past mass balances to an accuracy of individual years, is done for the Weißseespitze core, as close to the site where other pollen records in different matrices are available for comparison, as well as data from a pollen trap. 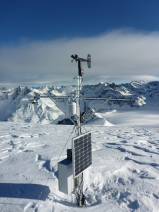 The overarching project aim is to research minimal glacier extent of summit glaciers during the Holocene period. To this end, cold base summit glaciers will be identified to be studied for their geometry, englacial temperatures, as well as for their surface mass and energy balance. The glacier stratigraphy and ice build-up process is investigated based on analysis of water isotopes, chemical and physical properties, along with radiometric dating methods. Key research questions are: i) what are the maximum age constraints of cold base ice at the highest elevations? ii) what are energy flows from and to the present day cold ice bodies at their interfaces withthe  atmosphere and with possibly frozen bedrock?